For a video compilation of this beautiful journey, click here: Watching Miracles of Nature - Robin Nest

In late May on Memorial Day weekend, my dad was tending to the spring flowers in our backyard garden when he noticed that a bird was hurriedly going back and forth from the green belt to the supporting pillars underneath our deck. My dad sat quietly observing the bird, soon realizing that the bird was making frequent trips to a nest that it had already made on the top of the pillar. He immediately rushed back inside and ecstatically told us all: “I think we have a bird nest underneath the deck!” 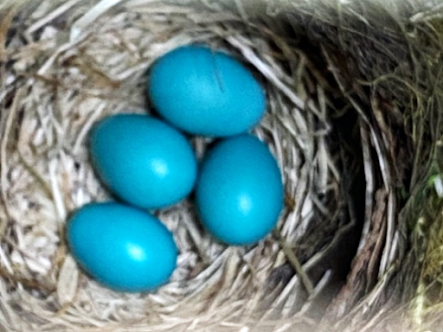 The even more exciting part was that we could see directly down into the nest between the wooden slats on our deck, and to our surprise, there were already 4 beautiful blue eggs in the nest! After doing some research online, we determined that these were eggs laid by an American Robin. The vibrant blue hue of their eggs is so unique that it has inspired its own color shade called "Robin's Egg Blue.”
We were thrilled for what was to come – little chicks hatching and growing into nestlings and then fledging the nest. We couldn’t wait to watch the baby robins come to life and take to the skies right in front of our eyes!
But alas, this was not meant to be. The next morning when we woke up, the nest wasn’t there. Unfortunately, it had taken a great fall overnight, which we suspect to have been from the stormy weather and strong winds the previous night. This tragic incident left us all downhearted and gloomy the entire day. How would the robin react to seeing her eggs completely broken? I couldn’t sleep that night thinking about and processing everything that had happened. In the coming days, I slowly forgot about the incident and lost all hope of getting to see baby robins growing up.
My dad was also very upset about this hapless occurrence, so he decided to closely inspect and analyze the location where the nest was originally built. He realized that it was very precariously perched and hence must have fallen. Hoping that the robin would come back next year, my dad cleaned the area where the nest used to be and added wooden supports on the side to ensure that a future nest in that location would have support and protection from winds. Now, the location was all set and ready for a future nest.
A week went by of us desperately hoping that we would somehow be able to experience the fascinating growth and maturation of baby robins firsthand. Once again, my dad was in the backyard tending to the flowers and noticed that a bird was unusually active, rushing back and forth. He silently sat to observe, and to his surprise, he realized that the birds were building a nest in the exact same location!
We were all delighted to hear the great news but also astonished that the bird had chosen that exact same spot to raise her babies, all in the span of a week. We all understood that for this to happen not once, but twice in a row was an extremely rare occurrence and we were all filled with gratitude. After a closer look, we determined that they were robins as well! This left me thinking; was this the same robin pair willing to use this spot to try again, despite what happened the first time? Or had another pair of robins stumbled upon this spot and chosen to lay their eggs here?
Looking at the nest between the deck slats, we noticed that the nest wasn’t complete yet. Although it had the surrounding structure – which was now well protected thanks to the wooden support on the sides – it still didn’t have the bottom layers yet. My dad had installed a Wi-Fi camera so we could monitor the nest without going on the deck and potentially disturbing the robins. Would the robins finish the nest the next day? Would they lay eggs again? If they did, how many eggs would they lay this time? The exciting part was that we just didn’t know! 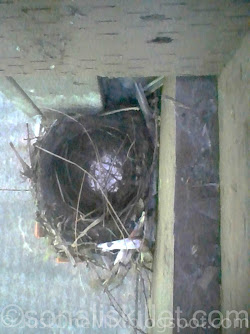 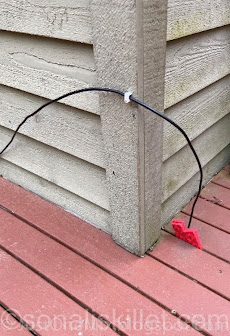 As soon as I woke up the next morning, I rushed to see the live video feed through the camera we installed, hoping that the nest would be completed. To my absolute surprise, I saw there was a stunning, bright blue egg in it, the same color as before. Apparently, the robin had completed building the nest early that morning and had started the process of raising a family all over again. I rushed to go tell the rest of my family, and they mirrored my pure excitement and enthusiasm. Together, we all began to look forward to watching these baby robins grow again!
Robins only lay one egg per day. They usually lay four during the first nesting and three in the subsequent nesting. Assuming this was the same robin pair, we were expecting two more eggs in the next few days. Sure enough, the robin had laid two more eggs over the next two days! 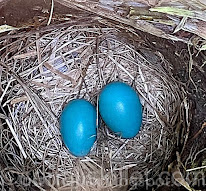 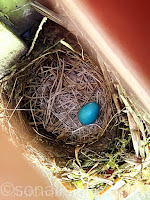 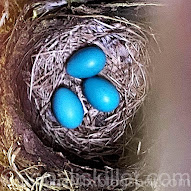 Robins typically begin the incubation process after all the eggs are laid. They sit on the eggs for 12 to 16 days. All the incubating is done by the female as she has a brood patch (incubation patch that helps heat transfer from her body to the eggs). She hardly leaves her eggs for more than 5 to 10 minutes at a time. The dad always stays close to the nest, sometimes on the nest, and keeps an eye out for predators while the mom leaves the nest to take a break and feed herself.
The female robin sits on the edge of the nest and rotates the eggs multiple times a day to regulate the temperature and to ensure that as the babies incubate they don’t get stuck to the inside of the eggshells. The chick has to eventually fight its way out of the egg. It uses a special hard structure called the “egg tooth” which is essentially a hook on its beak. Even with that, it still takes hours or an entire day for the chick to arrive. We have a laptop in the room streaming live video where we all check in from time to time to watch the baby bird action, and record if something is interesting. 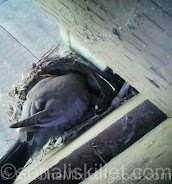 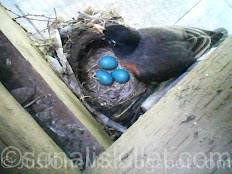 After 14 days of incubation, the first egg hatched! A cute little robin baby, eyes closed and all curled up, laid silently in the nest. The delicate hatchling had no feathers yet and its eyes were closed. The mom was very careful with the baby and kept it tucked underneath her. She sat on the nest throughout the day to give warmth to the baby and to continue incubating the other eggs as well. We noticed a crack in the second egg, so we knew that the baby would come out anytime in the next 24 hours. The next morning, the second egg hatched and there were 2 babies! 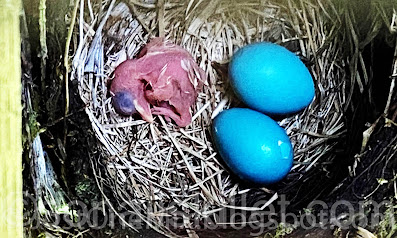 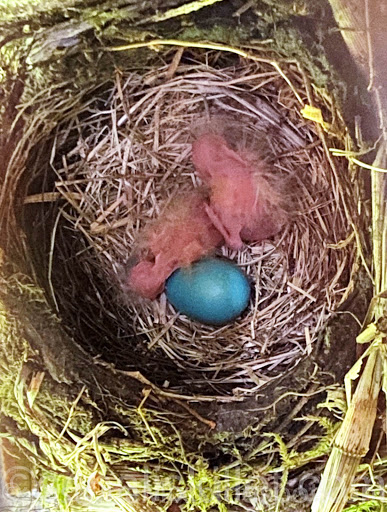 Since the eggs were laid consecutively each day, we eagerly waited for the third egg to hatch on the following morning. Unfortunately, after long hours of waiting, the egg did not hatch the entire day. I researched the possible causes of a robin’s egg not hatching and read that some eggs are not fertile, meaning they may never hatch. It also said that this was a common phenomenon. At least we got to witness two of the eggs hatching! Looking back at it now, it was probably for the best since the two birds sat snug in their nest after they finished growing. If there were 3, there would most likely be a higher chance that one would have fallen out. 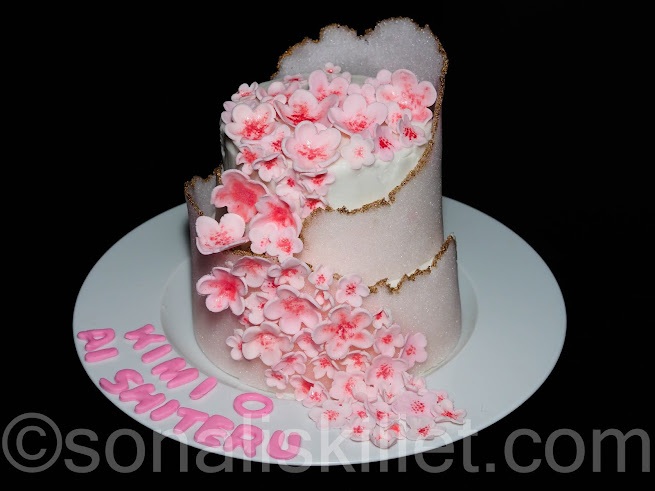 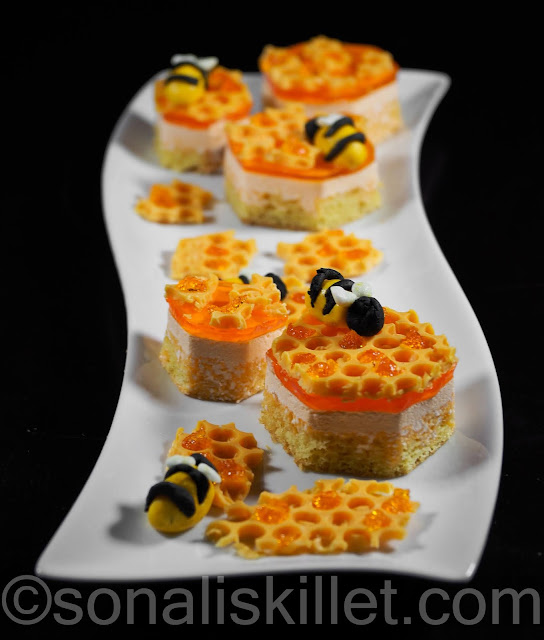 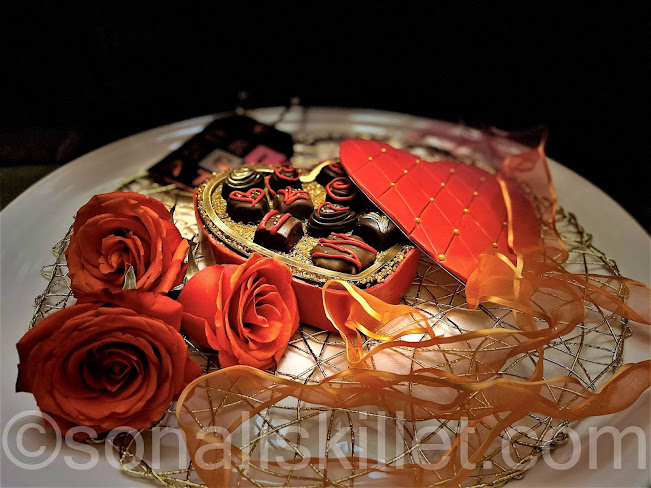 Sonali
Hi! My name is Sonali and I am in high school. I'm self-taught and like to bake just for fun! All concepts, food presentations, and photography is done by me.